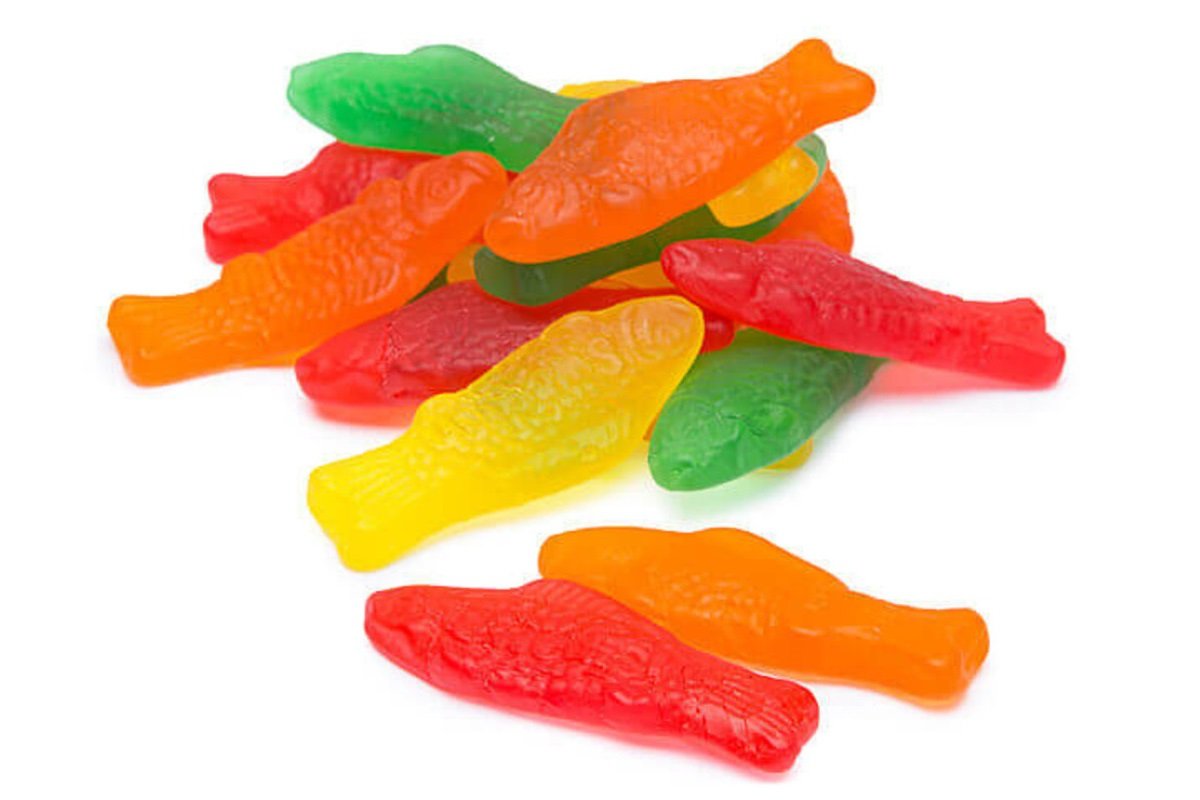 Whether you have just begun a vegan diet or are new to the vegan lifestyle, perhaps you have been wondering whether these popular candy dishes are vegan or not.

What are Swedish Fish?

Swedish fish are a red fish-shaped vegan friendly candy that you can find at gas stations, grocery, vending machines, or at any convenience store.

In the 1950’s, Malaco, a Swedish candy maker made the decision to expand their business and export a few of their confectionaries to North America.

Before they were ever considered a candy, they were eaten after drinking wine, and more so regarded as a wine gum.

And, if you’re wondering why these candies are shaped like fishes – Sweden has a large fishing industry. So, it’s representative of that.

No – these fish didn’t swim all the way across the Atlantic – they were actually created in a factory, and are truly vegan.

For those of you that find yourself in Sweden one day and like the taste of black licorice – you might consider trying some Swedish fish in black licorice flavor while you’re there.

As you can see, there isn’t any gelatin (a protein collagen from pig or cow) in the ingredients list, which is a common non-vegan ingredient found in many candies nowadays. And, there aren’t any funky fish ingredients or other animal derived ingredients in the recipe.

So, Swedish fish are overall a pretty vegan candy, if you take out the base ingredient, salmon, that’s used. Just kidding..

But, let’s talk more about the ingredients in these vegan treats.

There are some controversial ingredients in Swedish fish that some vegans may contend with.

White sugar that’s not organic is more often than not processed with bone char (ground-up animal bones), which some vegans may not agree with. This is done for a whiter shade of sugar. Even though these animal byproducts do not end up in the final product, the fact that it’s been in contact with bone char is enough for certain vegans to opt out of consuming this ingredient.

Cane sugar may be considered non-vegan by some stricter vegans, just for the fact that they’ve technically been contaminated with bone char particles.

An oil that is derived from palm tree fruit, palm oil is used to enhance a food items texture and taste, and is found in many processed food items.

One of the more environmentally destructive ingredients, palm oil production has a dark side.

Palm oil is not harvested in the most sustainable of ways. Sections of the Earth’s tropical rainforest are cleared to plant more and more palm trees, and it affects the endemic species that are already endangered as it is. The forests are burned as well as all of the animals themselves that live within it.

Palm oil is regarded as a crop that’s ‘efficient’ to grow, however the degree of environmental devastation that results from its mass production is face-palm worthy.

World Watch Institute has reported that Indonesia is one of the top countries that emits harmful greenhouse gases, which is mainly due to the large amounts of palm oil produced there.

Since Malaco includes this ingredient in the Swedish fish vegan recipes, the company technically supports the palm oil industry. Just something to consider.

These are used to give bright color aesthetic to food products, but at a cost.

Mice, rats, and dogs are guinea pigs for animal testing experimentation, and many do actually die as a result. Blue 1 testing on mice has led to cancer and tumors amongst them, which is suffering that may not be necessary as a result of these cruel and unnecessary experiments.

Since 1955, recorded consumption of artificial food dyes has increased 5 times over in the U.S. However, there are countries that have banned certain food dyes – for example, Europe has prohibited the manufacturing of Red 5 in Europe for its adverse health effects.

Most often times, vegans prefer their food products to not have these ingredients in them, but many will still consume them because they’re still technically vegan.

Many vegans are opposed to the animal cruelty associated with artificial colors.

As you can see, even though there is no gelatin or outright animal products in Swedish fish, there are other ingredients in the recipe that may be of concern for some vegans.

There are many Swedish fish products on the market that are available in original and miniature sizes, and they come in a variety of flavors. These are the ones typically thought of as the regular Swedish fish vegan.

This chewy candy is a red Swedish fish that’s shaped like a fish and has a fruity flavor that many perceive to be as cherry.

One of the vegan products that you can pretty much find anywhere, these Swedish fish candies are easy to pick up when you’re out and about.

Swedish fish candies are fat free and gluten-free, and are considered vegan without any animal derived ingredients. There is no fat per serving with this choice, provided you eat a single serving size of about five fishies. So, they’re not that unhealthy of a candy snacking option. 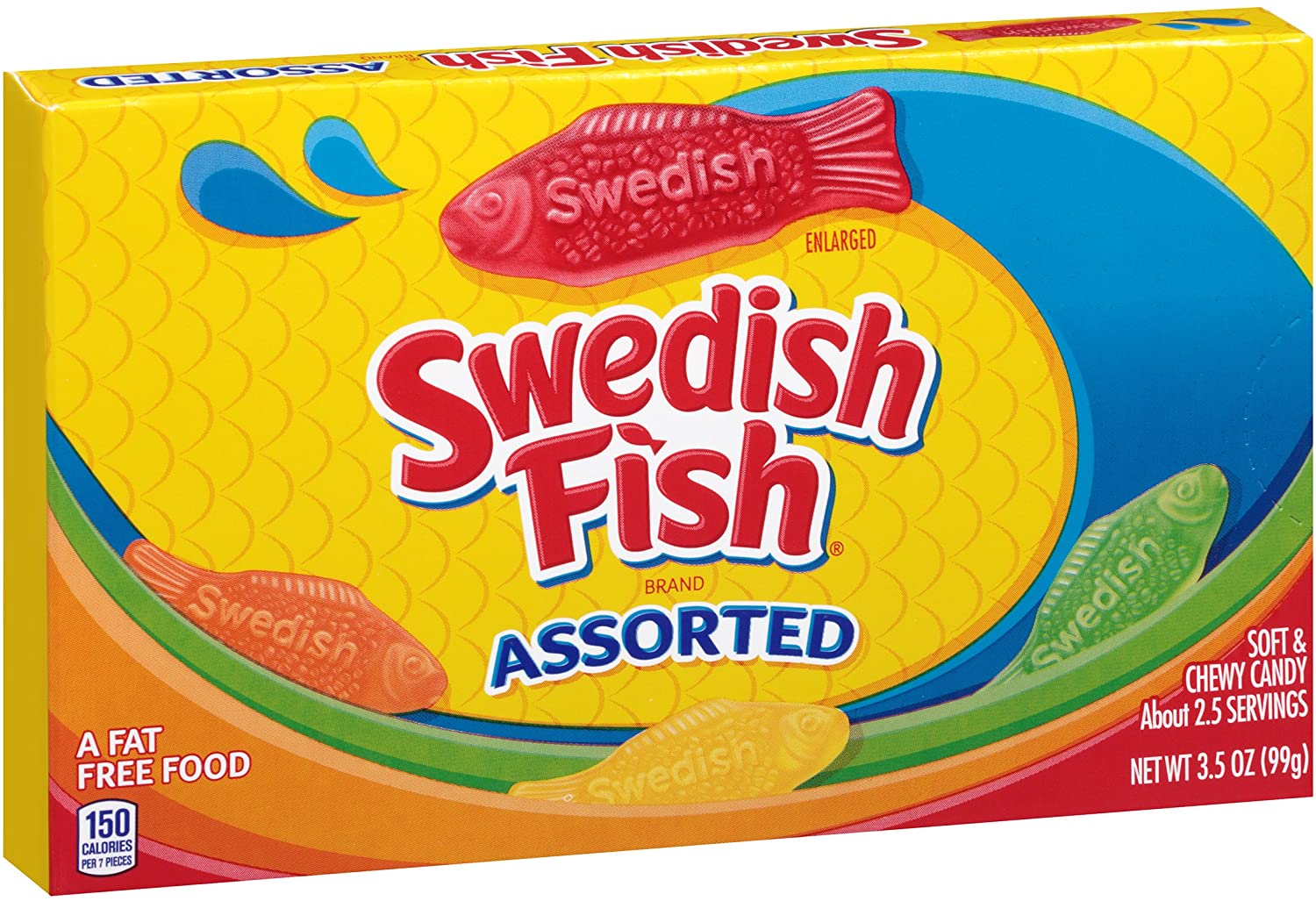 This Swedish fish vegan option features fish shaped candies that come in fun colors like sunset yellow, blue, orange ones, and green ones, too.

These are completely vegan friendly and come in bite size chewy texture pieces..

If you are a stricter vegan, know that this particular candy does have refined sugar. But, there aren’t any outright animal ingredients in the recipe.

You can have these ordered straight to you through Amazon, or find them at any neighborhood store.

If you and the entire family love these, this vegan food product is available in a five pound bag for sale.

If you like chewy candies in fish format with fruity flavors, this vegan Swedish fish choice may be for you.

A soft and chewy vegan candy, these fishies are gelatin-free, fruity, delicious, and look similar to the regular packaged Swedish fish, except these ones are of assorted colors and flavors.

If you’re a stricter vegan, know that these do contain refined sugar as an ingredient. 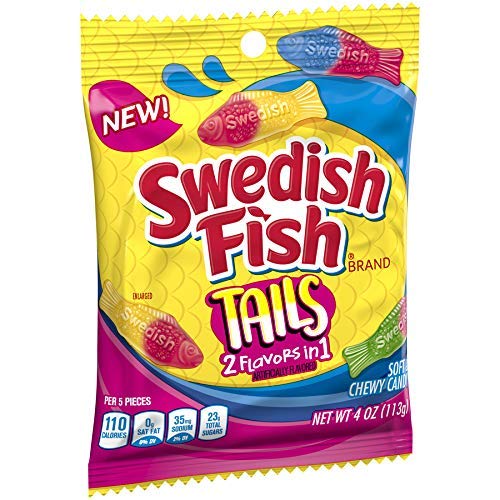 This candy option features 2 flavors in each soft and chewy candy. So, if you have trouble deciding on a single flavor, this could be a good choice for your Swedish fish selection that is considered vegan.

Each flavor has two flavors in one, so if you’d like to tantalize your tongue a little bit extra with this fish shaped candy, this option may be for you.

Whether you are a new or old soul to the vegan community, you’re bound to enjoy at least one of these Swedish fish flavors.

Some of the sweetest fish in the sea, this fish candy of Scandinavian descent is something to consider trying before you die.

And, if Swedish fish just don’t sound like your thing – consider some good old fashioned Twizzlers, or jolly ranchers.

Author: Brittani
Filed Under: Is It Vegan
Are Pringles Vegan?
Is Xanthan Gum Vegan?