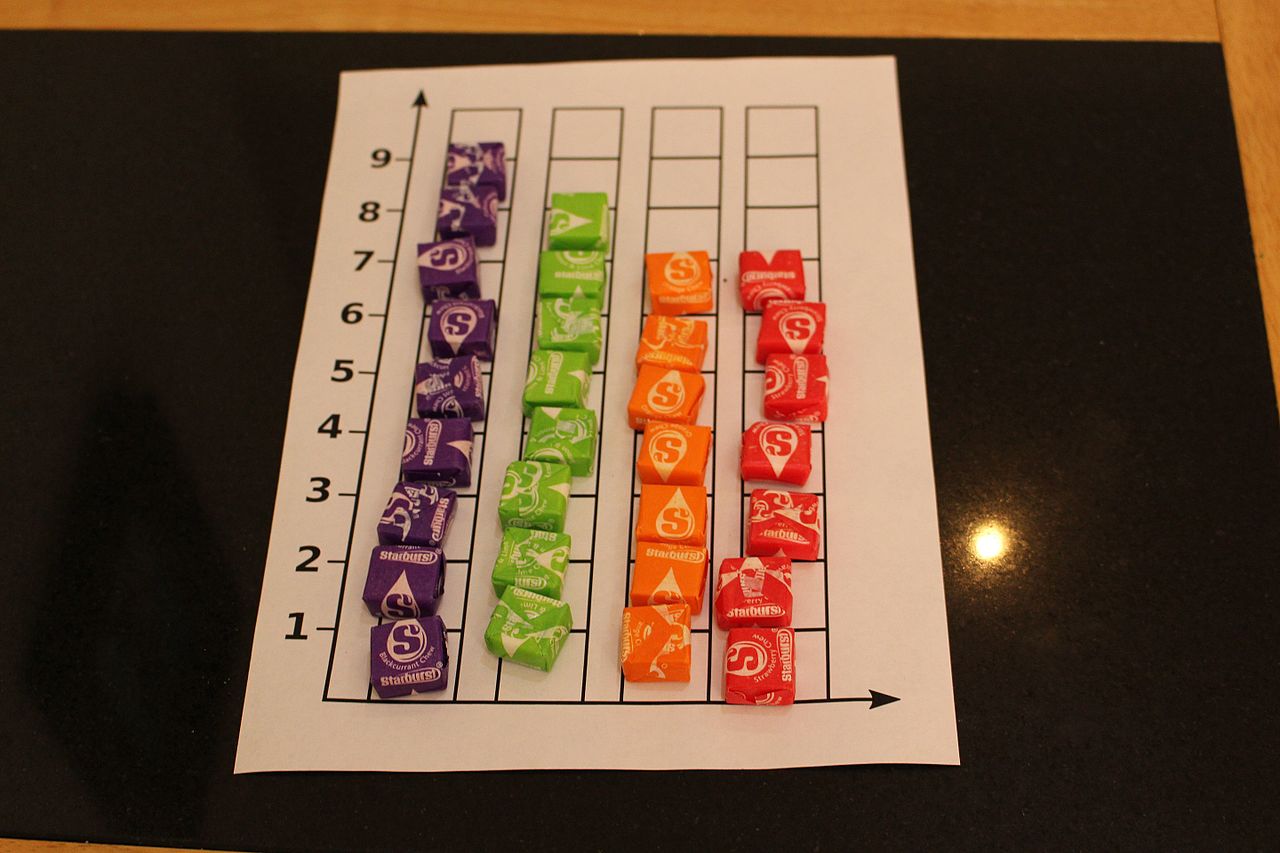 No – Starburst are not vegan.

If you’ve been thinking about starting a vegan diet, you may be curious to know whether these popular candies are suitable for your new lifestyle.

Produced by Mars Incorporated, Starburst has been around since 1960 and is one of the most loved candies on the planet.

Starburst candy produced in the United States is not vegan for the gelatin ingredient that’s in the recipe- however, if you live in the U.K, they are vegan, as uk Starburst don’t have gelatin in the ingredients list.

These candies were originally produced in Great Britain by the name of Opal Fruits, which is why the ingredients list differs between the U.S. and the U.K.

The following ingredients may be of ethical concern for certain vegans.

A point of concern for vegans is the widespread animal testing with food dyes that’s often performed on animals such as mice, rats, and canines.

As a result of this, innocent animals sometimes die. Though this isn’t always the case, it does happen. Whenever products are purchased that contain artificial colours, your dollar is going toward supporting this to continue.

In addition, there is research linked to food dyes and changes in human behavior such as increased aggressiveness, irritability, hyperactivity, as well as a lesser facility to learn new things.

Red 40 is a chemical and artificial dye derived from coal tar that’s used to give certain Starburst flavors its bright color.

With Red 40 in particular, animal testing studies performed on mice has proven a minimized reproductive ability amongst them, a decrease in overall brain weight, and even a reduced chance of survival among the newborn rodents.

Studies that involve food dyes Yellow 5 & Yellow 6 have linked consumption of these ingredients with cancer and other significant health concerns.

Lastly, blue 1 is also sourced from coal tar, and may cause allergic reactions in some consumers.

These flavors that are found in many processed foods nowadays can either be derived from animal products like pork or beef, or plant sources such as beets, herbs, or flower buds.

The natural flavors ingredient has a misleading name, and is not necessarily the most natural of food products to consume – it’s an additive that lacks nutritional value.

Sugar is often processed and filtered using bone char, which is ground up animal bones. Though this does not end up in the resulting product, the fact that this non-vegan ingredient is at all involved in the process is enough of a reason for certain vegans to be deterred from consuming it.

Bone char is many times involved in the production process of refined white sugar that’s not organic.

This is an ingredient derived from boiling animal (typically cow or pig) bones, skin, ligaments, cartilage, and water all together. Gelatin is used as an ingredient to hold the candy together and provides it with a chewy texture.

This is obviously not a vegan ingredient.

Yet another controversial ingredient, specifically for its environmental repercussions, palm oil is an oil that unfortunately has a dark impact on Earth’s ecology. Farmers must deforest virgin Amazon rainforest in efforts to make space for planting new palm trees, as well as burn the land, which harms surrounding wildlife and has a negative impact on the air quality.

For these reasons, many vegans prefer to avoid the palm oil ingredient in their diet.

Starburst has many different types of candies to choose from, ranging from fruit chews to jelly beans to chewing gum. 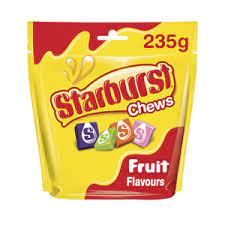 These are the classic Starburst candies.

These fruit chews are named so because they come in fruity flavors such as strawberry, cherry, orange, and lemon, tropical flavors, and also FaveReds, and are manufactured in little packets.

There is no question that this original variety of Starburst isn’t vegan, as the parent company has confirmed that gelatin from beef is found in all of the fruit chew flavors.

Note that each packet does contain 22 grams of sugar, so they have a pretty high sugar content. 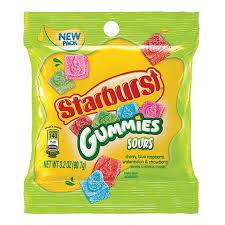 If you like sour – you’ll like this variety of Starburst gummies, and have a different texture compared to the classic candies.

First things first. These do have gelatin in the ingredients list, so they certainly aren’t vegan. But they are gluten-free.

These come in 8-ounce sized snack bags to easily take with you on-the-go. 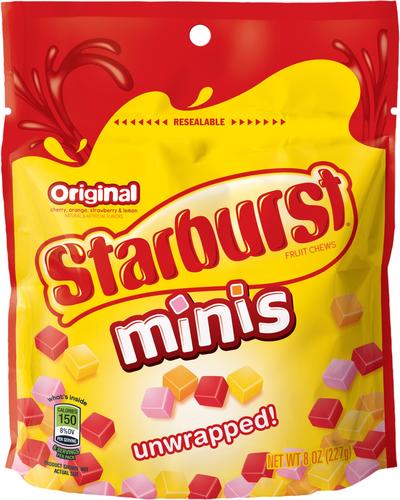 This Starburst option features the same fruity flavored Starburst that are just a bit smaller than the original size Starburst, if you just want a little morcel in your mouth at a time.

These minis are similar to the original Starburst recipe, except they also have confectioners glaze, and additives carnauba wax, mono and diglycerides, and sodium citrate.

These ones don’t have gelatin, but do contain a questionable ingredient – confectioner’s glaze, which is derived from the lac insect’s secretions. So, this variety of Starburst has animal derived ingredients and is therefore unable to be categorized as vegan friendly.

*The lac bug is an insect found in SouthEast Asia that secretes a resin-like drop onto certain species of trees, and is also used as a purple-red dye as well as varnishes.

Do note that if you’re a vegan living in the UK, this version of Starburst Minis vegan is vegan status, as the bug-derived ingredient is not found in these. 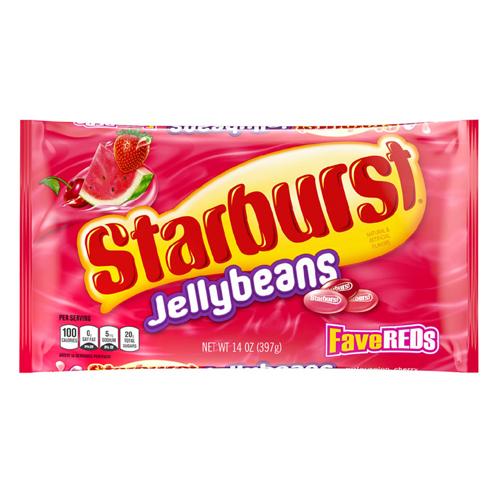 For those of you that want something that’s a little less chewy – this option is a good alternative.

The recipe is similar to the original Starburst recipe, except in addition these jelly beans have confectioner’s glaze, titanium dioxide, and sodium citrate.

This variety of Starburst candies jelly beans vegan doesn’t have any gelatin, so these almost constitute as a vegan candy, but eating confectioner’s glaze isn’t every vegans first choice.

Note that this type of Starburst dairy-free can only be found in the U.S. 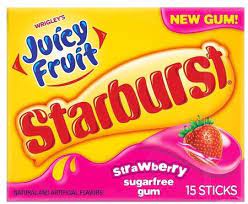 This Starburst candy option is recommended for those that want a longer lasting fruit juice taste in their mouth.

The ingredients list is a bit different for this variety of Starburst candy and is as follows: gum base, soy lecithin, malic acid, sorbitol, sucralose, natural and artificial flavors, BHT, citric acid, mannitol, aspartame and Red 40 food dye.

This option is a sugar-free product, for those of you watching your sugar intake. But, the ingredient that’s used in place of sugar – aspartame, does pose certain health risks which many vegans like to avoid.

This depends on how many Starbursts you’re planning on eating in a day.

With the health concerns mentioned above regarding certain ingredients, we’ll let you be the judge of Starburst nutritional value.

For those of you vegans that are allergic to gluten, do know that all Starburst candies are certified gluten-free.

Some might consider the concentrated fruit juices to be a healthy ingredient, but the other additive ingredients can prove to be of nutritional concern for health conscious persons.

And if you accidentally eat some of the Starburst wax paper because you’re so excited to eat the candy, it’s ok – as it’s non-toxic.

If Starburst nutritional value doesn’t appeal to you so much, perhaps one of the vegan alternatives will appeal more to you.

If the Starburst story doesn’t do the trick for you – check out this delicious and comparable organic, 100 % vegan friendly option. 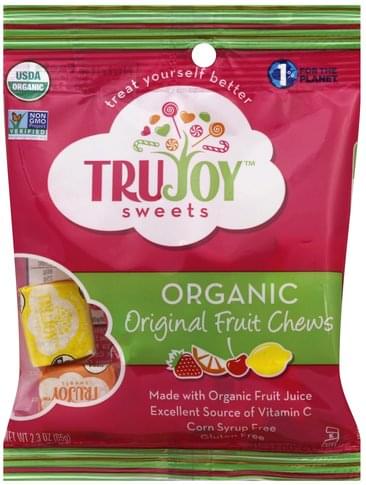 This is one of those vegan products that you can trust to be 100% vegan, and that’s also gluten-free.

If eating Starburst with confectioner’s glaze doesn’t float your boat, you might be happy to know that only organic sugar is used in this recipe- that’s to say there has been no bone char involved in the manufacturing process.

With no artificial colors in the recipe, either, this vegan Starburst alternative is a healthy anytime snack choice that kids are sure to love for their juicy taste and fun colors.

For those of you that like to make a difference with your dollar – a small percentage of the sales are donated to environmental causes with every purchase of these fruit chews.

How to Make Vegan Starburst at Home

There you have it – Starburst aren’t technically vegan, though it may look like it from the outside eye.

Whether you opt for sweet and chewy Starburst jelly beans with non vegan ingredients or wholesome organic fruit chews, your palette will be pleased.

If Starburst and candies of the like are out of the equation for you – you might consider vegan donuts instead.

Author: Brittani
Filed Under: Is It Vegan
Are Jolly Ranchers Vegan?
Are Pop Tarts Vegan?