No – most marshmallows aren’t considered vegan.

Fortunately, there are some vegan brands of these pillowy little snacks on the market, though.

What is a Marshmallow?

This is the name for a fluffy squishy treat that is an anytime of day or nighttime snack.

A marshmallow is most commonly formed nowadays by whipping together air, gelatin, and sugar into a light fluffy texture. The traditional way was to mix mallow root sap with egg whites and sugar into marshmallow cylinders, but gelatin is used now instead.

The mallow root sap has now been replaced with gelatin in many marshmallow brand cases.

The mallow plant, or Athaea officinalis, is a plant that grows wild along riverbanks in sunny yet cool spots, and produces white flowers that flower during the Summer. 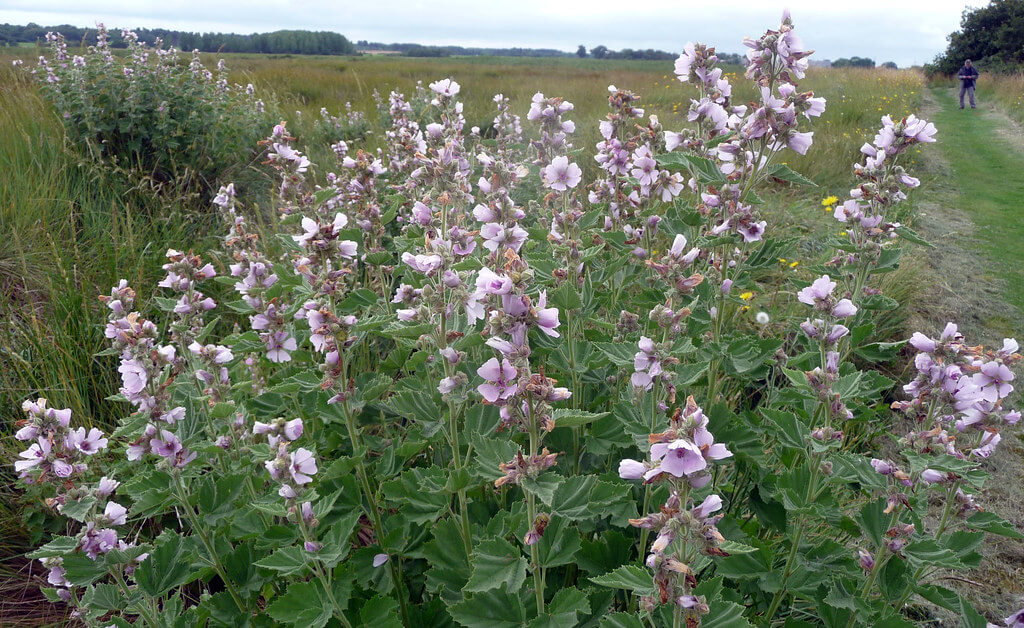 As early as 2,000 b.c., Egyptians would squeeze the traditional mallow sap from the plant and combine it with nuts and honey to snack on, which was the first recorded consumption of marshmallow.

The word “marsh”mallow refers to the plants ideal moist soil in which its growing – the soil just needs to stay a bit wet, but not so much that its roots are getting soaked in water.

Later, in the 1800’s, French confection makers brought back the marshmallow. It was discovered at this time too, that mallow sap mixed with egg whites and sugar could form to make a meringue lozenge to alleviate those with sore throats and coughs. So, the doctors would technically prescribe marshmallow as a remedy.

White sugar that’s not organic is more often than not processed with bone char (ground-up animal bones), which some vegans may not agree with. This is done for a whiter sugar color. Even though these animal byproducts do not end up in the final product, the fact that it’s been in contact with animals is enough for certain vegans to opt out of consuming this ingredient.

Refined cane sugar is often sugar that’s derived from sugarcane or from beet sugar that comes from beets. This is not always a vegan friendly ingredient, but if the sugar is organic, it’s a different story.

These ingredients are used to give bright color aesthetic to food products.

Some vegans are opposed to the animal cruelty associated with artificial colors.

Mice, rats, and dogs are guinea pigs for testing experimentation, and many do die as a result. Blue 1 testing on mice has led to cancer and tumors amongst them, which is suffering that may not be necessary.

Since 1955, recorded consumption of artificial food dyes has increased 5 times in the U.S. However, there are certain countries that have banned food dyes like Red 5 in Europe for its adverse health effects.

This one is a non-vegan ingredient, as it’s sourced from animals.

This is an ingredient derived from boiling animal (typically cow or pig) bones, animal skin, ligaments, cartilage, and water all together. Gelatin is used as an ingredient to hold the marshmallow together and provides it with a chewy texture.

Most conventional marshmallows are gelatin based marshmallows. However, vegan recipes use tapioca starch as a binder instead, and vegan marshmallows can’t definitely still be made.

This can be a pesky non-vegan ingredient as it can be sourced from animal as well as plant sources. Natural flavors are used to enhance flavor in processed foods.

How to Eat Marshmallows

There are many ways to enjoy marshmallows.

You can melt them into a fruit dip, use them to make s’mores, mix them into your granola, or eat them one by one out of the bag.

The most typical way to eat a marshmallow is to make a s’more with some graham crackers and chocolate, though. 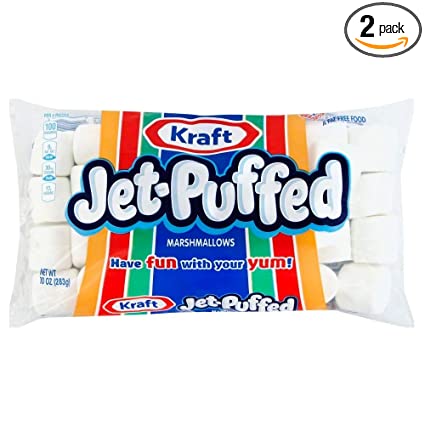 These are not vegan marshmallows, but they are a popular non-vegan brand.

They come in regular and mini sizes, and the regular size is a one pound bag.

These are the “normal marshmallows” you can find at pretty much any store.

The sugar in the recipe list is not vegan – only organic and unrefined sugar is.

You can melt these into a dessert recipe or have old fashioned s’mores over a campfire or the burner on your kitchen stove.

By the Cup Dehydrated Cereal Marshmallows 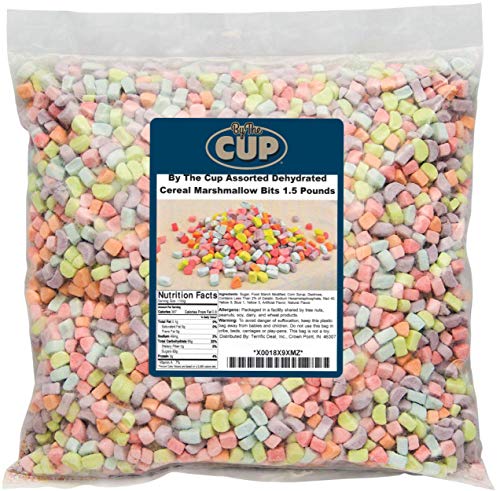 Were you one of those kids that saved the marshmallows in your lucky charms cereal for last? Or, are you perhaps still that adult?

These are basically rainbow-colored dehydrated marshmallows that you can add to a bowl of cereal or your morning yogurt. They can also be eaten by themselves. They’re not cannibalistic or anything like that – they’re simply enjoyable as-is, too.

These come in a resealable bag, which is handy because it’s a one pound bag. That would be a whole lot to eat in one sitting.

There may be artificial flavors and colors in this one – but at least there’s not any high fructose corn syrup – a known neurotoxin.

This marshmallow choice is not a vegan one. 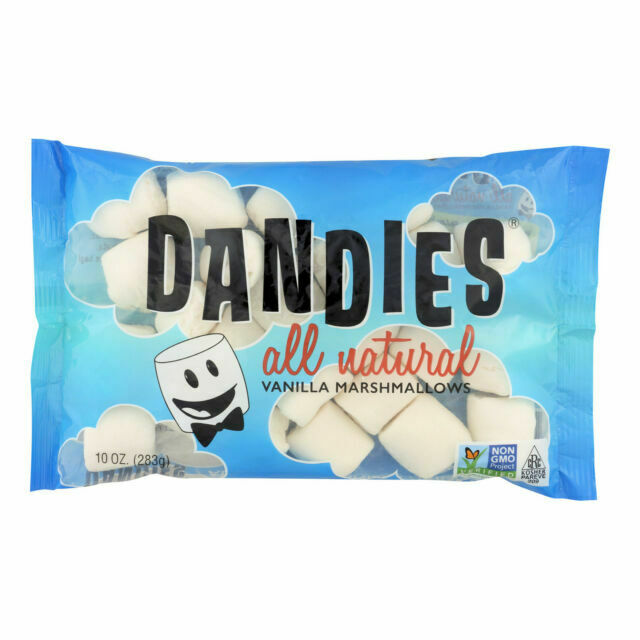 This is a plant based vegan marshmallows brand that doesn’t contain any gelatin or corn syrup in the recipe.

They contain tapioca syrup, cane sugar, filtered water, carrageenan, soy protein, and natural vanilla flavor, and are pretty similar to traditional marshmallows, but these are vegan.

The completely vegan marshmallow recipe has all natural flavors and colors – nothing artificial, non GMO ingredients, or non-genetically modified ones.

Dandies marshmallows come in au naturale pumpkin, vanilla, and peppermint flavors, and there is an option to buy mini sized ones, too. 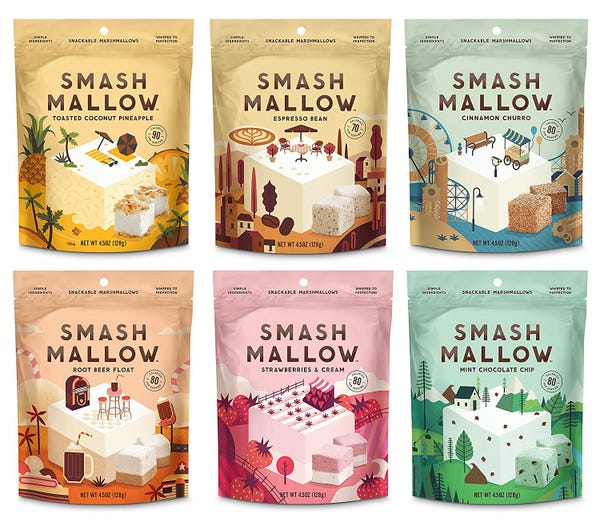 This brand of marshmallow contains purely natural and vegan marshmallow ingredients for those of you that follow a plant based diet.

You can use these to make flavored s’mores with or garnish a chocolate martini with some. Or, you can eat them as is right out of the bag.

These marshmallows are gluten-free, non-GMO, soy-free, and don’t have any corn syrup or preservatives.

One of the vegan marshmallow brands that make a low-calorie snack, Smashmallows have only 25 calories per marshmallow and less than one gram of fat per serving.

And, with the organic cane sugar in these, you don’t have to worry about it being tainted with bone char – if you’re a stricter vegan that’s concerned about that. 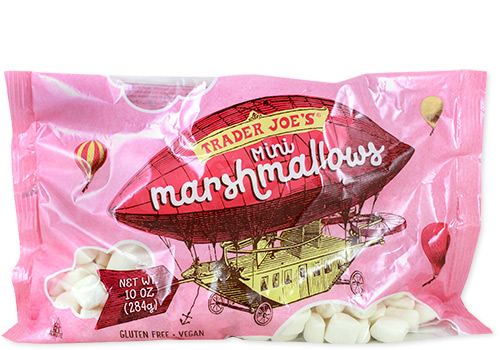 These marshmallows are mini sized ones, and plant-based.

They are also gluten-free and have no animal products in the recipe.

These sweet treats have a slight vanilla taste, and have a slightly firmer texture than marshmallows made with gelatin.

One of the vegan options without gelatin, this marshmallows vegan choice is perfect to sprinkle on top of your cup of hot chocolate because it won’t melt right away, or layered on top of a sweet potato casserole.

And feel free to contact the company if you have any questions about the ingredient sourcing or about the product in general. 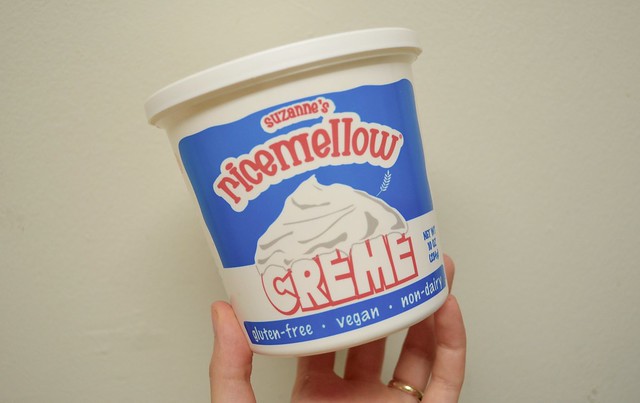 This vegan marshmallow creme is used for baking, as frosting or as a filler, and can also be enjoyed by itself.

This option is a great one if you’re pressed for time and don’t want to wait for the marshmallows to boil and melt – this fluff is already fluffed and the work is done for you.

This creme can cost a little bit extra, but you save by buying a couple extra minutes of time.

You can also try spreading some of this spread on Oreos and see how you like the flavor combo.

How to make your own Vegan Marshmallows at home

If you’re curious to make marshmallows vegan in your own kitchen, check out this video for the how-to.

You’ll need a blender or a mixer, parchment paper, glass tupperware, and a whisk.

You can also play with some food dye if you prefer colorful marshmallows.

Well, they aren’t exactly a health food. If you’re watching your sugar intake, just be mindful of how many you eat in one sitting.

Because if you eat too many, you may risk turning into a marshmallow.

Whether you choose Dandies Vegan Marshmallows, the Trader Joe’s vegan marshmallow, or decide to make your own at home in your pajamas, you can’t go wrong having marshmallows in your life.

Who knows – maybe you’ll find vegan marshmallows to be a new crucial part and delight of your vegan diet and you’re now feeling inspired to plant a mallow plant in your backyard.

Hot cocoa kind of just isn’t the same without marshmallows, and s’mores are a necessary part of life. And if you’ve decided to recently go vegan, that shouldn’t stop you from enjoying these puffs of paradise.

Author: Brittani
Filed Under: Is It Vegan
Are Tootsie Rolls Vegan?
Are Twizzlers vegan?