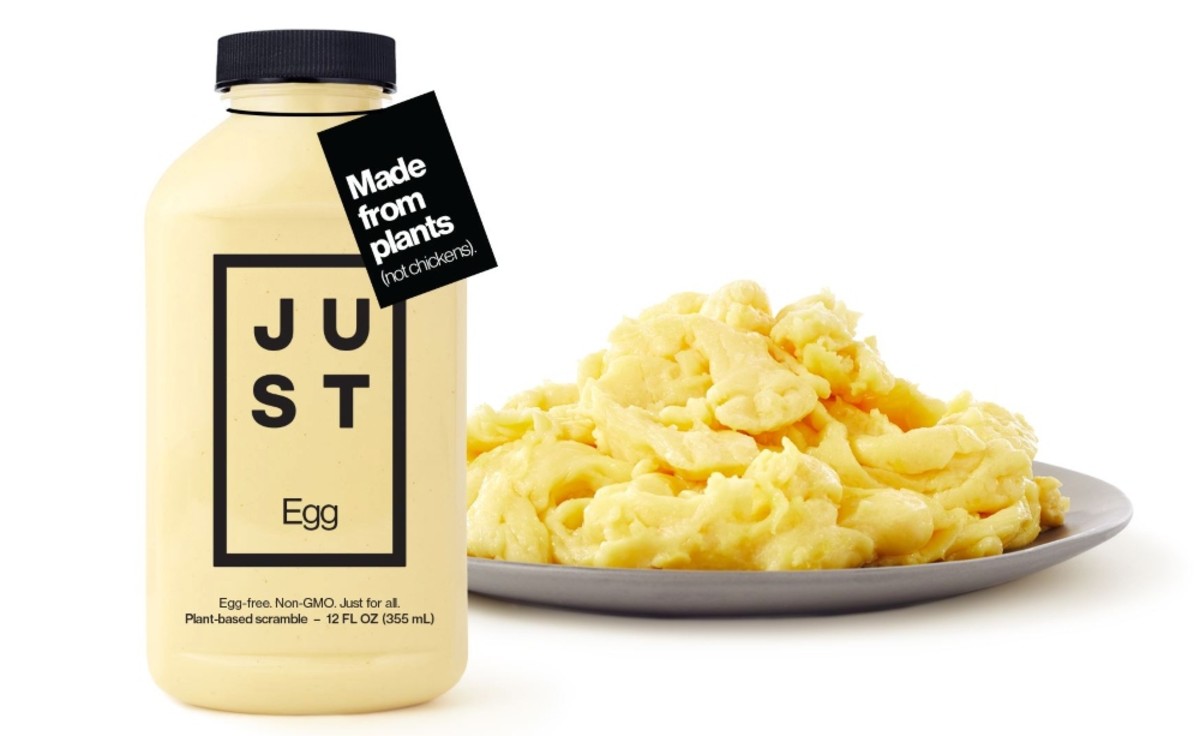 In this article, we’re reviewing one of the most popular vegan egg products on the market – JUST Egg.

JUST Egg is an egg mixture made entirely from plants. If you’re looking for a vegan alternative to a scrambled egg mix, then you don’t need to look much further than one of the popular products on the market.

Here’s a full overview of this life-changing product:

When it comes to an egg scramble substitute, your primary concern is probably whether it tastes and cooks like eggs. A substitute should mimic the original product as closely as possible. We are happy to report that this one does.

JUST Egg comes in a bottle with a convenient screw-top. Simply pour the egg mixture into a pan and scramble as you would with normal eggs. The product was developed by extensive product research and Michelin-starred chefs to taste, smell, and feel as close to eggs as possible.

The taste is so close to real eggs in taste and texture that it could probably pass many blind taste-tests. It’s not exact, but it’s about as close as you can come with a vegan product. Either way, it’s delicious.

It also cooks like eggs, which is a major benefit. You can make omelets or scrambled eggs or use it for baking or anything you would do with a normal egg mixture.

In evaluating any vegan substitute product, you should also take a close look at what’s in the product. This is an important consideration in understanding what you are putting in your body. This is especially important when it comes to a nutritional product such as eggs. The vegan substitute should offer the same nutritious benefits as the real thing.

JUST Eggs delivers on this front. Each serving has 5 grams of protein and no cholesterol. The protein comes largely from mung bean protein isolate.

While it’s not as protein-packed as an actual egg, it’s still a good source of nutrition, and you can feel good about the plant-based ingredients.

JUST Egg focuses on making products that are close vegan substitutes. It works with Michelin-star chefs and world-class product developers to build its vegan products from the ground up. The brand uses entirely plant-based ingredients, and taste and texture are the top goals.

It also has a freshness guarantee. If the freshness is not up to your standards when it arrives at your home, JUST Egg will give you your money back.

Consider Before Buying an Egg Replacement

The world of vegan food replacements is rather complex. There are so many ingredients and so many factors that determine whether a food is a worthy substitute. Whether you’re looking into buying JUST Egg or any number of egg replacement products, here are some factors you need to consider.

This is also important with eggs because their taste and texture is determined by how they are cooked. You need to be able to bake them, scramble them, and more. You should expect a vegan substitute to behave similarly to real eggs.

Taste isn’t the only factor when evaluating vegan substitute products. You should also see how nutrition stacks up against the real deal. Once again, this is a primary consideration in a product such as eggs. You want to compare the vegan alternatives to the main product itself.

For example, eggs are known for their high protein content, so you would expect a vegan alternative to tout similar benefits. Be sure to closely examine the nutritional outlines before purchasing an egg replacement.

You also want to carefully consider the ingredients of any vegan substitute option. Focus on whether it contains all-natural versus artificial ingredients. You probably want the ingredient list to be as natural as possible. Watch out for artificial colors, preservatives, or flavors.

When buying vegan eggs, you also want them to mimic the flexibility of actual eggs. Eggs are known for being able to be cooked in various ways and added to a large variety of dishes. As such, you want an egg substitute to act much the same way.

You should be able to use an egg substitute to cook a variety of different dishes, including everything that you could make with actual eggs: scrambled, made into omelets, baked, and more. One of the main features of an egg is its versatility, and an egg substitute should have the texture and composure to match this versatility.

Let’s see how JUST Egg stacks up the factors listed above. Does JUST Egg have the features necessary to make it a top tier egg substitute?

The number one consideration of any egg substitute is whether it tastes and feels like eggs. We are happy to report that JUST Egg fits the bill! This product very closely matches the taste and consistency of real eggs. It’s about as close as you can get with any vegan substitute.

It’s almost not enough to just say it, you need to try it for yourself. The way that JUST Egg looks and tastes are very impressive. It’s a worthy vegan egg substitute because it tastes like eggs!

Mimicking eggs in taste and texture isn’t enough. A vegan egg substitute should copy one of the primary reasons that people eat eggs in the first place, for the nutritional value!

JUST Eggs does a great job on this front. It has 5 grams of protein per serving and doesn’t contain any cholesterol. It derives this protein from mung beans.

The rest of the ingredients list is pretty impressive, as this egg substitute is made from entirely plant-based ingredients.

Overall, we were very impressed with the quality of ingredients in JUST Egg, and it seems clear that it came from effective research and development.

Next, a viable egg substitute needs to cook like eggs. It should act predictably and have the versatility of application that is found in real eggs. We are happy to report that JUST Egg surpasses expectations in this regard.

You can use JUST Eggs just as you would use real eggs. The amount of recipes that are possible with these eggs is pretty impressive. The container is essentially like a scrambled eggs mix. You can pour it into a pan and scramble it, make omelets, use it as a baking ingredient, and much more.

JUST Eggs even offers plenty of delicious recipes on their website. There’s everything you would expect from egg recipes – eggs Florentine, French toast, crepes, egg sandwiches, and more. There are even numerous baking recipes, like cookies, pancakes, and banana bread. The recipes are conveniently divided into different sections, based on how you would be treating the eggs.

As you can tell, we were very impressed with the features and benefits of JUST Egg. We hope we’ve provided you with a full outline of what we like so much about this product and why it is such an excellent vegan substitute. We were very impressed with how it replicated eggs in terms of taste, texture, nutritional value, and versatility. That’s all you can ask for from an egg substitute.

As a bonus, it is fairly priced and offers great value!

To truly evaluate a product, though, you have to compare it to the competition. We will do that next so that you can make a truly informed decision of which egg substitute is best for you!

The vegan substitute category is full of viable options to choose from. As a vegan, it’s exciting to know you have choices, but it also can be a little bit overwhelming to sift through all the options available. Let’s take a look at the top three alternatives to JUST Egg so that you can decide which is best for you.

First up we have VEGG. VEGG touts itself as an egg yolk alternative. It is mixed with water to mimic the taste and texture of an egg yolk, and then you can add it to your favorite recipes. Unlike JUST Eggs, this product is more focused on usage in baking and cooking recipes. It mimics the taste and texture of egg yolk but doesn’t really allow the same versatility to be used as real eggs. If you’re simply looking for a replacement for the yolk portion of the egg, then this is a solid product.

In terms of an egg replacement for baking, though, we think this one is great. It is made with only four ingredients and substitutes easily into many recipes and makes them vegan friendly. It’s a simple replacement ingredient, but don’t expect it to rival the taste & texture of real eggs in the same manner as JUST Egg.

This is another vegan egg replacer. To use, you blend or whisk with cold water, and then cook similar to an egg. We actually really like the simplicity of this product. You can cook it similar to real eggs – making scrambles, omelets, or whatever you desire. The taste and consistency are similar to real eggs, although we think JUST Egg does a better job in this respect.

If you’re looking for a replacement product that you can use just like eggs, we think this is another great option. The differences might come down simply to which version you prefer.

Thanks for checking out our comprehensive review of JUST Egg and the top alternatives on the market.

In case you can’t tell by now, we really like JUST Egg! When it comes to a vegan replacement product, the best thing you can say is that it’s just like the real thing. JUST Egg is about as close as you can get to a real egg scramble! The taste and texture is an extremely close substitute, and you can use it just as you would real eggs. There are so many great recipes to choose from, and the nutritional value closely rivals that of real eggs.

Overall, we like JUST Egg, and we think you will, too. It’s a relatively inexpensive product, so give it a try and see what you think! We think you’ll be more than satisfied.