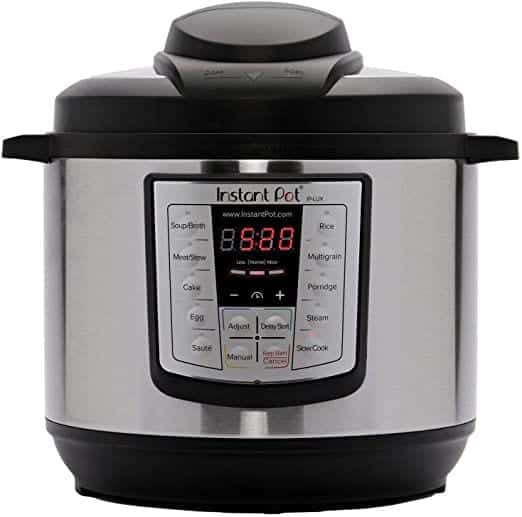 If you’re the proud new owner of an Instant Pot model, then it’s no secret that you’re probably thrilled but overwhelmed with which button to use, where to begin, or how to start cooking. Furthermore, releasing the pressure can be immensely intimidating to anyone new to pressure cooking, particularly the quick release with steam jet and noise. Nonetheless, don’t let a little noise stand in the way of delighting in delicious meals from your pressure cooker.

We’ll walk you through everything you need to know about using your new Instant Pot, including the difference between quick release and natural release, safety features, a few recipes to try out, and much more. Read on!

WHAT IS AN INSTANT POT?

Soaring in popularity in recent years, Instant Pot is used as the generic name to refer to pressure cookers of any brand. By definition, it’s the brand name of a multi-cooker that serves as a yogurt maker, steamer, slow cooker, searing/sauté pan, pressure cooker, warming pot, and rice cooker, rolled into one.

The Instant Pot Company began with one product known as the Instant Pot multi-cooker before diversifying into a vast assortment of convenient appliances such as toaster ovens, air fryers, and blenders.

While this multi-cooker serves different purposes, the most popular is the Pressure Cook feature. It’s this function that paves the way for you to whip up various foods at a fraction of the time it would take in an oven or pan. If you’ve used a stovetop pressure cooker for decades, then you’ll undoubtedly gravitate more towards the Instant Pot for the following main reasons.

HOW DOES INSTANT POT WORK?

It creates an airtight environment for steam to build up, thereby causing a significant rise in the internal pressure and temperature. Under high pressure, the fiber in the food you’re cooking is tenderized, and flavors infuse in a jiffy. Instead of evaporating, steam rich in nutrients condenses in the pot, and the nutritional value is retained as a result of the cooking speed.

Here’s a breakdown of the components of Instant Pot.

Upon unboxing your Instant Pot, the first thing you’ll want to do is wash the parts and accessories. The stainless steel inner pot and steam release valve are dishwasher-friendly. The base unit isn’t dishwasher-safe and will require you to wash it by hand and as you do so, avoid immersing it in water.

SAFETY FEATURES FOR YOUR INSTANT POT

While Instant Pot models come with a myriad of safety instructions, below are the most crucial ones to keep in mind.

Depending on your Instant Pot model, the float valve is silver or red and typically pops up above the lid’s level when the unit is pressurized. Alternatively, it may pop up to be flush with the lid’s level. If you have a 6-quart LUX unit, for instance, you’ll notice that the silver float valve usually sits below the lid level and pops out to be flush with the level of the lid when it’s pressurized.

WHAT IS QUICK RELEASE?

It’s the process of manually forcing the pressure out of your Instant Pot by turning the steam release valve to the ‘venting’ position. You’ll need to proceed with caution as you turn the valve because piping hot steam will immediately be expelled.

We recommend using the handle of a long spoon to slowly turn the steam release valve to keep your hand at a safe distance. Furthermore, ensure your face is away from the valve. A Quick Release comes in handy when you want to stop the cooking process in a jiffy for tender cuts of meat or avoid overcooking your dish.

It’s a straightforward process that can be summed up in 2 easy steps.

Step 1: Once the cooking cycle is complete, carefully adjust the venting knob from the Sealing to the Venting position to expel the pressure inside the Pot, in a heartbeat.

Step 2: The pressure will be released within a few minutes. Wait for the metal pin (floating valve to completely drop before you open the lid. While the steam shooting out can be intimidating at first, you’ll get used to it. For an illustration on how to Quick Release Instant Pot, check out this video:

WHY USE QUICK RELEASE?

It’s an excellent way of bringing the cooking process to a halt in a jiffy to prevent your food from overcooking. Therefore, Quick Release is your Holy Grail for food such as fast-cooking veggies, ranging from corn and cauliflower to broccoli and delicate seafood such as lobster, salmon, and crab.

Despite the immense convenience it ushers in, below are a few things to keep in mind when it comes to Quick Release.

Yes! It’s completely safe, provided you take the right precautions. The steam that shoots out from the Instant Pot is extremely hot. Therefore, the manual that comes with the unit warns users against placing their hands or leaning their faces over the device as it releases steam.

It’s advisable to turn the valve with an object such as a wooden spoon or kitchen tongs to prevent the skin from coming into direct contact with the dangerous steam. Other Instant Pot users prefer wearing silicone oven mitts or using a kitchen towel to cover their hands.

HOW DOES QUICK RELEASE DIFFER FROM NATURAL RELEASE?

A natural release entails leaving the pressure release switch in the sealed position when the cooking time comes to a halt. As a result, the Instant Pot slowly releases the pressure with no input from you. When the pressure is completely released, the float valve will instantly drop, thereby unlocking and opening the lid.

A natural release is a tad bit anticlimactic compared to a quick release. Therefore, there’s no jet of steam when the natural pressure release begins. Moreover, there’s no clear way of knowing when the pressure is completely released and no signal or beep when the lid unlocks. At times, you may hear the float valve drop if you’re within earshot.

The time it takes for the pressure to be naturally released greatly depends on the amount of liquid in the Instant Pot and its ingredients. Keep in mind that a natural release can take anywhere between 5 and 30 minutes in the unit, depending on the amount of food.

Step 1: After the cooking cycle, wait for the metal pin or floating valve to completely drop before opening the lid.

Step 2: Always adjust the venting knob from the Sealing to the Venting position to ensure that all pressure has been expelled before you open the lid. Here’s a video on how to Natural Release Instant Pot:

WHY USE A NATURAL RELEASE?

If you’re cooking food that’s rich in starch or has a large liquid volume, such as a sauce, then Natural Pressure Release is ideal for keeping your kitchen spick and span. You don’t have to resign yourself to a messy kitchen. Given that the pressure is gradually released, the pressure cooker is more stable as a result of less movement. Your soup and stock come out cleaner, and there’s a higher likelihood of your food staying intact.

Here’s a breakdown of a few things to bear in mind when it comes to Natural Release.

HOW TO INSPECT YOUR INSTANT POT BEFORE EACH USE

Inspecting the unit entails following the step-by-step instructions discussed below to the letter.

By ensuring all the accessories and parts of your Instant Pot are not only in tiptop shape but also clean, you elevate your chances of achieving the best possible outcome during a Quick Release and natural release.

HOW TO PERFORM AN INSTANT POT WATER TEST

Before using your appliance for the first time, we recommend performing a water test. It serves as an initial test run that will ensure that your Instant Pot is properly functioning. Furthermore, the test will familiarize you with the quick release and natural release features for a better outcome.

Keep in mind that if you’re using the Instant Pot Ultra, you’ll use the dial to alter the cooking time and choose cooking programs before pressing the Start button. As opposed to a steam release valve that you’ll turn, this appliance comes with a steam release valve that automatically locks on the Ultra. Contrarily, you’ll need to turn the valve between the Sealing and the ‘Venting’ position in other models.

Now that you know the ins and outs of Quick Release and Natural Release, we’ve rounded up a few fundamentals you should be aware of when using an Instant Pot. While they may be confusing at first, they’ll become second nature once you use your appliance a few times. Depending on your specific model, the controls may be labeled differently.

Below are a few simple Quick Release recipes that you can try out.

Regardless of the recipe you choose to try out first, we advise following it to the letter for the first few times without substituting ingredients or altering the quantities until you get comfortable with the Quick Release and other handy features of your Instant Pot.

Armed with the nitty-gritty details of using an Instant Pot, including how to do a quick release, you can now use it with unwavering confidence, knowing that your meals will turn out to be delicious. The more you use it for cooking food, the more you hone your skills. After all, as with everything else in life, practice makes perfect.