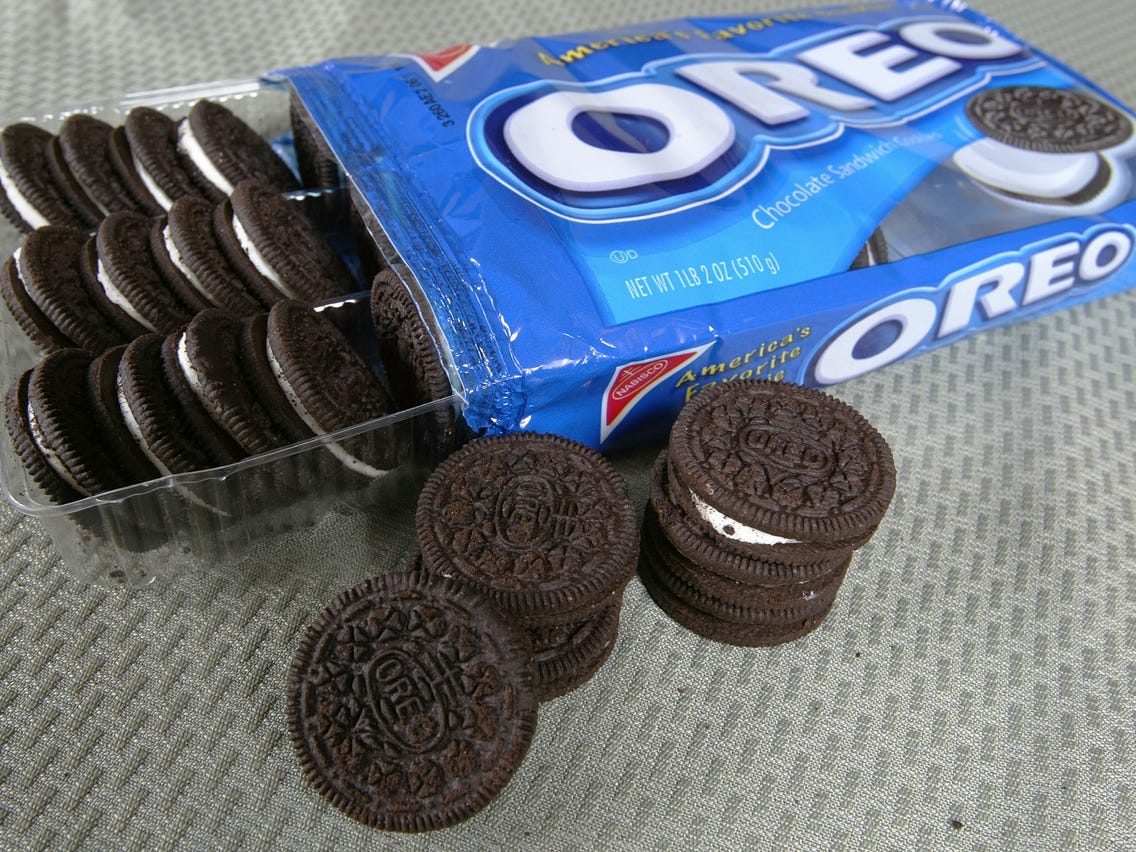 Maybe you’re having a nostalgic memory flashback to your childhood – picking the Oreo apart, peeling off the white cream and eating it, and then dipping your cookie into a glass of cold milk.

Oreo cookies are not made with any animal products, though these cookies are made in facilities that also process milk.. so there may be some traces of milk in them.

So, yes – Oreos are considered vegan.

However, if you have an allergy to even the slightest bit of milk or dairy product, then it’s your best bet to avoid possible cross-contamination and make your own, or just avoid them altogether.

What are the ingredients in Oreos?

As you can see based on the Oreo ingredients listed below, the list is vegan friendly, with no sign of animal products or any dairy products used in the recipe.

The company itself says that this food item is not suitable for vegans, but judging by the ingredient list and how it doesn’t list any milk or animal products, we are determining it to be vegan-friendly. Since milk is a potential cross-contact during manufacturing, the company doesn’t claim for it to be vegan, as the Oreos could have trace amounts of milk in them.

Were Oreos non-vegan in the past?

This cookie has been around since 1912, and the recipe has since evolved. In the early 20th century, Oreo cookies used to be made with pig fat… but after health concerns were raised in the 1990s concerning the consumption of animal fat, Oreos parent company Nabisco switched out the lard, or pig fat to partially hydrogenated vegetable oil instead.

How healthy are Oreos?

Similar to many other processed foods, Oreos contain genetically engineered and toxic ingredients such as high fructose corn syrup, which is a neurotoxin, and soy lecithin, an emulsifier made from soybean oil, which throws off the bodies natural hormone balance and can increase the risk of cancer.

None of the ingredients in Oreos are whole or complete food items.. so Oreos really aren’t the healthiest thing to be eating. Moderation is just something to remember when it comes to an Oreo cookie, though that’s easier said than done.

Another ingredient in Oreos to be discussed is palm oil – which doesn’t have any health benefits, and isn’t good for the environment.

Much of the palm oil that’s produced today is not grown sustainably in developing countries, with tropical rainforests being cleared to make room for palm oil plantations. This is so because it’s more cost-effective to use palm oil as fat instead of animal fat.

This also endangers the animals lives who depend on the palm trees.

Just because Oreos are not vegan, does not mean they are healthy or ethically produced.

Oreos definitely have a black and white, dark and light side to them, no matter which side of the oreo you dunk in the milk first.

It’s your own personal decision. The ingredients list on the Oreos package does not list any ingredients that have been derived from animals. However, the cookies have been manufactured in a facility that also produces food products with dairy products, so the risk for cross-contact is there.

Also, if you’re a vegan that is environment conscious, know that the palm oil in Oreos leads to significant wildlife habitat destruction.

PETA, one of the largest animal rights advocates does classify Oreos as an “accidentally vegan” snack.

How to make your own vegan Oreos

For a video on how to make your own vegan Oreos at home – check out this tutorial below.

There you have it – a healthy vegan oreo recipe that is fresh n shockingly delicious, with no risk for cross-contact.

If you don’t feel like watching a video – check out this recipe for a tasty vegan recipe.

In the end, whether you consider Oreo cookies to be vegan or not is up to you. The ingredients label of Oreos does not list milk or animal products as an ingredient.  But, you could be consuming cross-contact nanoparticles of milk, and if you’re ok with that – go for that sweet (vegan) oreo.

You can also check out the Oreos web page FAQ’s for additional questions about their products.

Author: Brittani
Filed Under: Is It Vegan
Are Doritos Vegan?
Is Yeast Vegan?