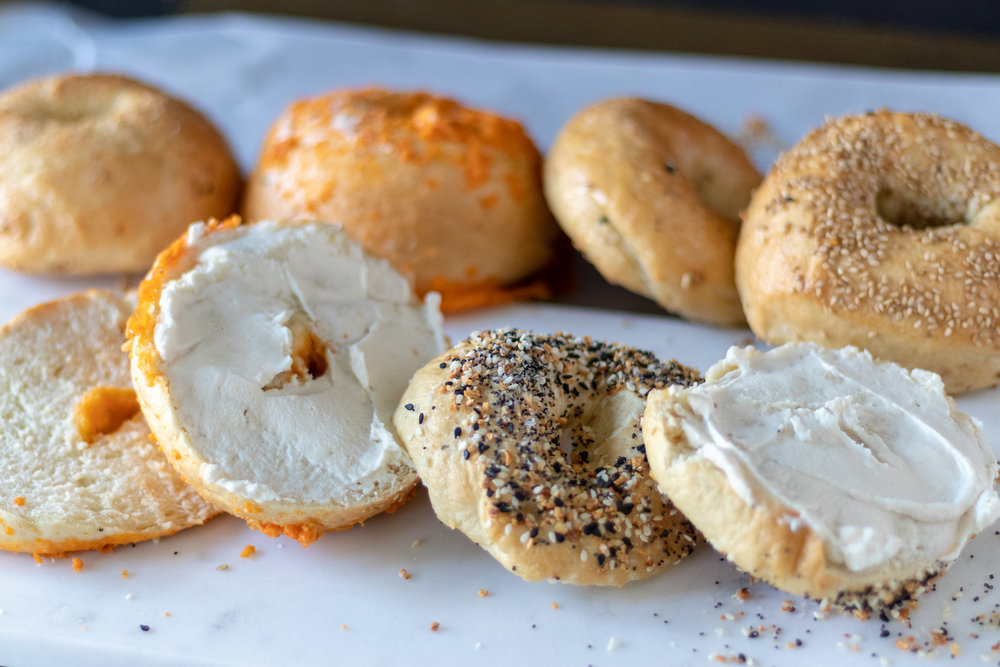 We’ll cut straight to the chase. If there is no sign of milk or animal products in your bagel, consider it VEGAN.

Nowadays, seeing as how we’re in the 2020s and there are limitless options out there for everything you could ever want in the world – next time you go to the grocery store, you’re sure to see at least several vegan bagel brands on the shelf.

Studies show that a vegan breakfast that’s rich in fiber and carbs will leave you feeling fuller for longer, which will overall result in less caloric intake throughout the day – a vegan bagel is the perfect fuel to begin your day with. Plus, it’s convenient, affordable, filling, and easy to switch up recipe-wise.

You might consider cinnamon raisin bagels to be your favorite, blueberry, one with poppy seeds, or perhaps you like to do yourself up a bagel sandwich with your favorite toppings.

However you like to enjoy your bagel, let’s examine which ingredients typically go into a bagel, and how to find the best vegan brand of bagel for you.

Flour, water, salt, sugar, and yeast are the most common main ingredients found in a bagel ring- none of which contain animal products, which makes this go-to breakfast item a vegan-friendly one.

Though some bagels do contain some ingredients that have been derived from a non-vegan source – This mainly comes into play when the bagel is a flavor other than plain, and tends to include a dairy product, cheese, or sometimes meat. Just check the label beforehand.

What determines a bagel to be non-vegan?

Bagels you find at the grocery store or at your local bagel joint might include some non-vegan ingredients like:

-Honey. Some bagel recipes include honey or honey-powder, which may or may not be part of your vegan diet.

-Eggs. These are sometimes mixed in with the dough for color and flavor – it can make the bagel appear shiny.

-Milk. Some manufacturers will use milk instead of water in their bagel recipes.

-L-Cysteine. This is an amino acid and a substance that’s used to soften dough, which can either be derived from poultry feathers or human hair.. L-cysteine can often prove difficult to detect. In any case, consult with the manufacturer through email, or only buy bagels that have been vegan-certified.

Any ingredient that is sourced from an animal is not considered to be vegan. So, to be extra certain your bagel is vegan, check the extra flavors and additives listed on the bagel label.

Non-Vegan Ingredients to look out for

Before you buy a vegan bagel, check the ingredient label for any of the following ingredients that are not vegan. You’ll know that your bagel isn’t vegan right away if any of these are listed on the label.

*The bottom three ingredients are not necessarily sourced from animals, but they could be plant-based.

Also, if you’re a strict vegan, watch out for flours that have been bleached, as the process likely involved bone char, which is charred animal bones. If you want to avoid this, stick to bagel brands that use unbleached flour.

*fyi: you might also see a common additive – guar gum or ascorbic acid which is a thickener that adds nutrients, and is also vegan.

The most traditional bagel toppings are non-vegan, but for every non-vegan option there is a vegan one, of course.

A popular and non-vegan bagel topping is that of cream cheese and lox, which is brined salmon.

Another common topping that people love that doesn’t fall into the vegan category is cream cheese.

Now, let’s zoom in now on some vegan bagel toppings-

Since we are now in the 2020’s and living in a world where there are many vegan alternatives on the market for everyone, you can bet there’s a vegan cream cheese option for every flavor you can imagine.

People also love to enjoy avocado and tomato on top of their bagel, which is not only a succulent flavor combination, but also exceptionally healthy food synergy, as when tomato and avocado is combined, cancer-fighting properties are produced.

**Fun fact: Tomatoes are filled with lycopene, a carotenoid, which is also an antioxidant (which is what gives a tomato its red or yellow color). Plus, when you combine tomato with the healthy fat of an avocado, the body is more easily able to absorb the lycopene, which prevents cancer and slows age-related diseases. 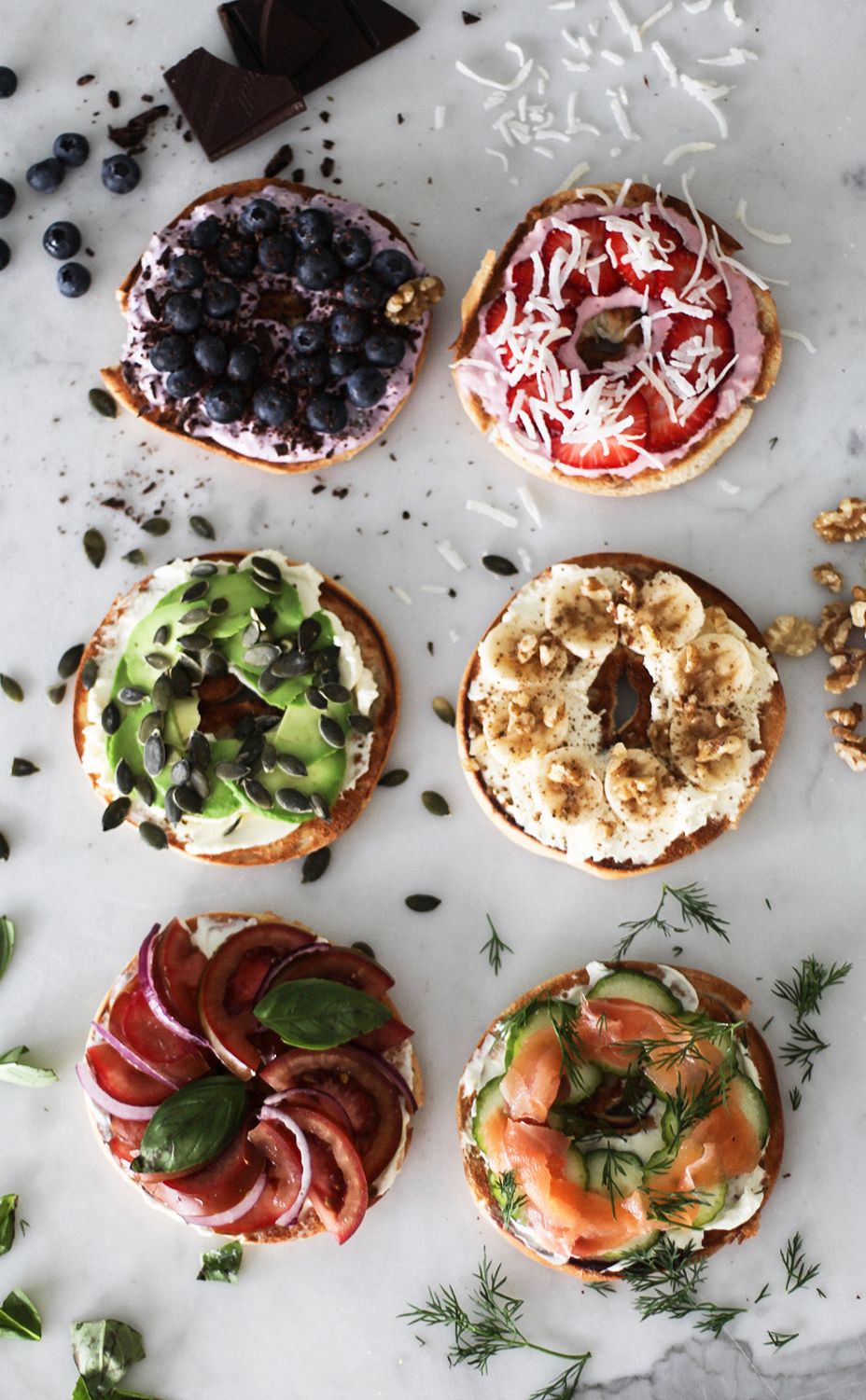 How to easily determine if a bagel is vegan

If you want to save yourself some time and avoid having to read the entire ingredient label to screen for non-vegan ingredients on bread products, here is a lightning-fast way to spot them:

Beneath the ingredient list, you’ll find an allergen label on bagels and breads and in general it will say “contains dairy or/eggs.”

Food manufacturers are required to label their products with this tidbit of important info, and it’s helpful because you’ll know right away if your food item is vegan or not. This applies to bagels, but also to any food item in general.

If you want to be extra thorough in your assessment perhaps because you might have a food allergy, it’s advised to read the ingredients label of your bagel before you eat it. Or, you could opt to make your own bagel to make extra certain it’s vegan.

What makes a bagel Vegan?

-Wheat flour. This type of flour is the most commonly used, as it creates a strong dough and a dense, chewy texture.

-Yeast. This ingredient fermentshe sugar in the dough releasing carbon dioxide, which makes the dough rise.

-Salt. This helps strengthen the gluten strands, regulates the yeast, and adds flavor.

-Liquid. Usually, water is the liquid that’s used to moisten the dough so the ingredients can all combine together.

-Sweetener. This can be anything from sugar, to barley malt syrup, to molasses, corn syrup, or malt extract

-Fat. Vegetable oil, coconut oil, or shortening is commonly used in vegan bagel recipes to improve the crumb factor of the bagel.

You’ll often find add-ins in your bagels like blueberries, seeds such as poppy seeds or sesame seeds, herbs like rosemary or chives, and spices or grains.

If you’re craving a bagel on your way back home from dropping the kids off at school, Einstein Bagel Bros has quite an assortment of flavors to choose from. All of their Classic bagels and most of their Signature bagels are vegan.

As of 2019, this bagel chain has begun to carry the dairy-free Daiya vegan cream cheese brand. If you’d like to read the full disclosure on their nutrition and allergen information, and ingredient list, you can visit their website or email them.

Odds are if you’re craving a vegan bagel on the go, you’ll be driving past a Starbucks before you know it. This coffee chain carries a few different flavors of vegan bagels, ranging from multigrain, to plain, to poppyseed, to blueberry. And, if you love having a cup of coffee to go with your bagel, this place obviously has just what you need. This is a particularly convenient option, as Starbucks locations are easily found everywhere.

Many flavors of vegan bagels are offered at Panera Bread (and vegan options in general, too), including blueberry, cranberry, plain, poppyseed, and walnut. The bagels with sesame seeds here are also vegan. This is also convenient, as Panera Bread has over 2,000 locations in the U.S.

The following brands are either vegan or have vegan options:

*All of the Sara Lee options are vegan, except the “Soft and Smooth” varieties.

The ingredients list is usually on the packaging of the bread item – but in case it’s not, you can email the company and further inquire.

How to make Vegan Homemade Bagels

For a short video on how to make simple vegan bagels a home, check out this link:

If you’d prefer to read a recipe, here is one for vegan cinnamon raisin bagels.

And, here is one for vegan-friendly blueberry bagels, for good measure.

All in all, seeing as how most bagels are dairy-free, the majority of vegans are able to enjoy them.

Of course, there are some that do contain animal products like milk, eggs, or honey, so the bagels you might pick out to eat will depend on your degree of veganism, too. Most grocery stores and bagel shops carry a fair amount of vegan bagel options, since veganism is all the fad these days. And, if you’ve just never been that into bagels, you can never go wrong with a Dave’s Killer bread.

If you’re looking for some ideas on what to try out as your next vegan bagel topping – check out this site.

And if you’ve been wondering why the bagel wanted to go to the bar…well, he just wanted to get toasted.

Author: Brittani
Filed Under: Is It Vegan
Are Donuts Vegan?
Is Cocoa Powder Vegan?