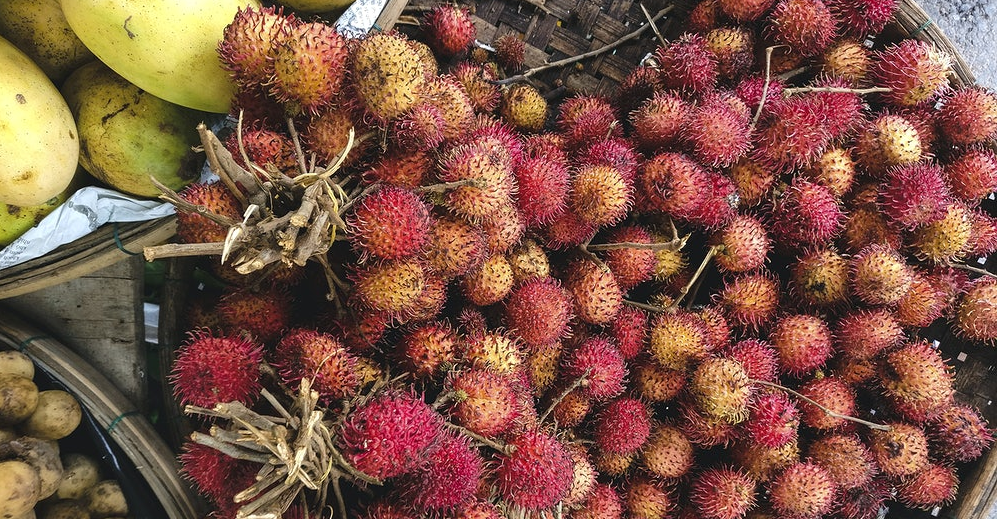 Rambutan and lychee have many similarities that often cause them to be mistaken for one another. They are two tropical fruits that are similar in shape, color, and size. It may be surprising to find out that this is where the similarities end. That’s why we are taking time today to compare rambutan and lychee to discuss their similarities but, more importantly, their differences.

The origin of rambutan and lychee are similar. They are both primarily found in China and Southeast Asia, where they are found and cultivated today.

How they are different lies in the conditions in which they are grown, which also affects where lychee and rambutan are located.

For rambutan to thrive, it should be grown in hilly terrains with rich soil. Because of this, rambutan can be found growing in Central America.

Lychee is different in that it requires hot, humid climates with ample amounts of rainfall. This allows lychee to be grown in Europe and North America.

Rambutan and lychee often get confused for one another because of their appearance, but when you take a closer look, you can begin to see the differences.

At first glance, rambutan and lychee colors look similar. They are dark red with shades of yellow and orange; however, there are distinct differences between the two when you take a closer look.

First, rambutan has fibers that grow from the fruit that resemble hairs or spurs, which is how it gets its name. These fibers are typically bright green to bright orange and can easily be seen on all sides of the fruit.

Lychee is different in that it has the same general color without the fibers. Instead, the exterior is rough but with no fibers.

Rambutan and lychee are also very different in taste.

If you prefer a rich, sweet, and creamy taste with a slight tartness, you will likely prefer rambutan. Rambutan is soft, tender, and has a sweet and sour taste, often compared to a grape.

Lychee is different. It has a crisp taste that is often compared to a pear or apple. It also has a floral flavor that runs throughout it, giving it a lighter and crispier taste. Because of this, it can also have a bite of sourness.

Let’s take a look at the nutritional content of rambutan and lychee and see how they are different.

Additionally, rambutan is a great source of copper, manganese, and antioxidants. These are vitamins and minerals that can often be difficult to find in fruits and vegetables.

Eating or drinking rambutan can provide the following health benefits:

The thing you need to remember about lychee is that they have a high carb and high sugar content. While these are natural sugars and carbs, you’ll still want to eat lychee in moderation.

Like rambutan, lychee has a variety of health benefits as well, and they include the following:

How to Eat Rambutan and Lychee?

Rambutans and lychee are known as superfruits. This means they are packed with vitamins, nutrients, and minerals that put them in a higher category of food known as superfoods.

Rambutan and lychee can be eaten the same way. They require no special preparations. They can be eaten as is or prepared to your preference.

You can enjoy them in a variety of ways. You can eat as is, by simply peeling the fruit and cutting open the fruit, removing the large seed from the middle, but there are various other methods you can choose to enjoy rambutan and lychee.

One of the ways you can enjoy rambutan and lychee is by muddling them into juice or other beverages.

Puree in a Smoothie

Add to a Salad or Fruit Salad

You can also add rambutan and lychee to your favorite salad or fruit salad. This is a great way to enjoy the flavors of rambutan or lychee while they complement other flavors in the salad.

Just remember to always peel the rambutan or lychee and remove the seed inside before adding it to your food or drink.

Rambutan and lychee are two fruits that seem similar but are very different. Knowing the difference between these two fruits will make it easier to decide the best way to enjoy them. This also helps you know which fruit is the best to pair with different types of food.

If you find that you don’t enjoy the taste of rambutan or lychee, but you want to get all of the nutrients that are available from the fruits, we suggest adding them to a smoothie. You will be able to drink the nutrients while also tasting the stronger flavors that are found in some of the other fruits and vegetables of the smoothie.