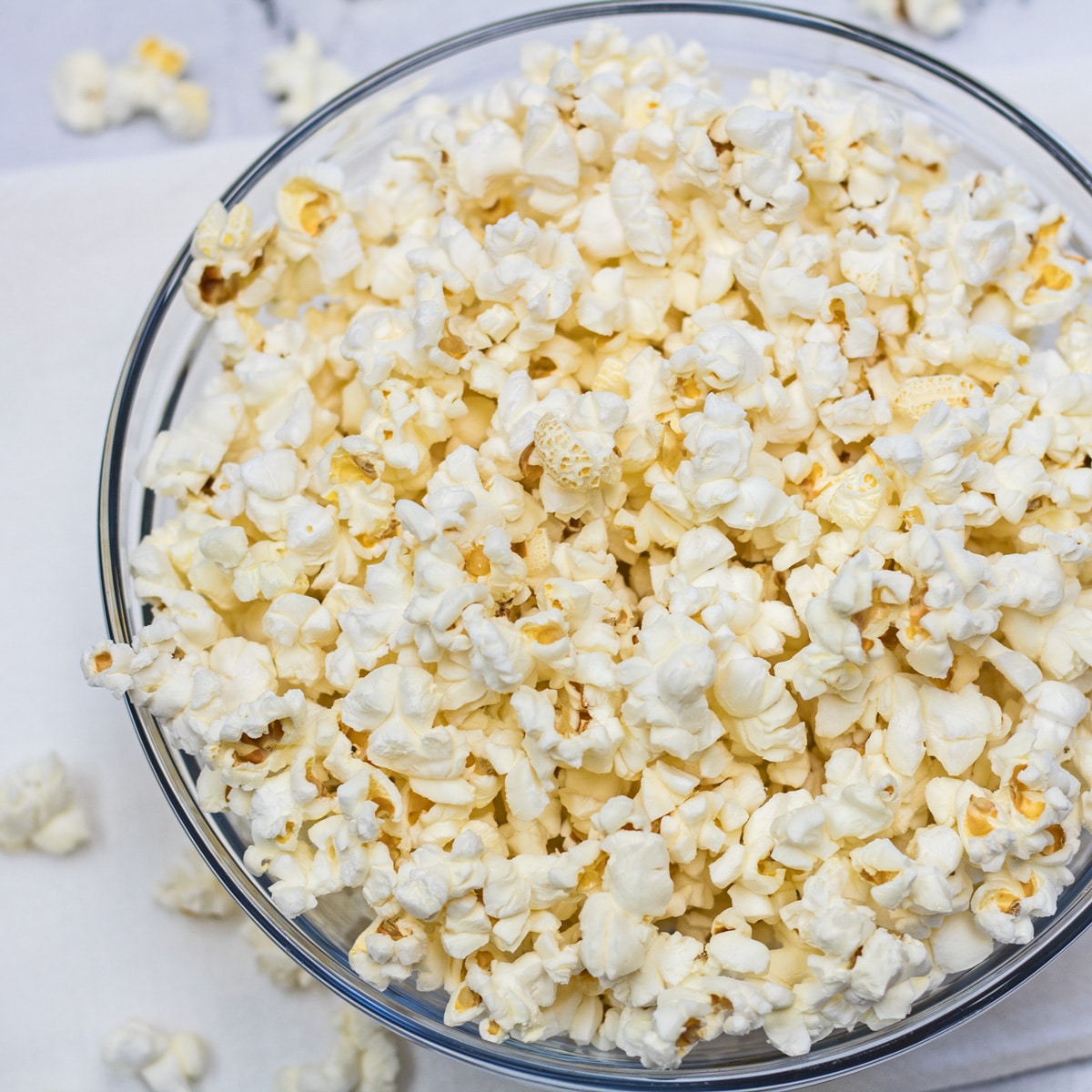 The word popcorn likely conjures an image of that crispy, warm, salty, nostalgic snack you would eat handful after handful of at the movie theaters as a kid, and perhaps still do.

Whether you like to indulge in popcorn while relaxing with a movie, or ritually eat it as an afternoon snack every day – odds are you know what popcorn is. But, just in case you don’t, we’ll update you.

If you’re new to the vegan diet and have been wondering if popcorn is vegan – well, it is!

Popcorn is code for popped corn kernels. When cooked on the stovetop in a pan, the heat warms the kernel and the water inside of it expands, which increases the pressure against its starchy outer surface layer. This eventually gives way to the opening of the outer layer – it explodes, and the kernel is literally turned inside-out.

To give you an idea of how long popcorn has been poppin’ – the oldest ears of corn were found in both 1948 and 1950 in the Bat Cave of West Central New Mexico, where the oldest ones there are estimated to be dated around 5,600 years old.

Popcorn is just one of those snacks that have been engrained in society for a while, especially in the United States.

Though you really only need popcorn kernels to make popcorn, it just doesn’t taste the same without oil, added spices, and salt.

*Many vegan foodies like to sprinkle nutritional yeast on top for a cheesy flavor.

Most companies add some type of oil, salt, or spice to their popcorn recipe – so it’s up to you which flavor you decide to try based on the available options.

This is an animal product and is not considered a vegan ingredient. If you’re a vegan and don’t wish to add butter into your diet – consider a vegan butter. There are a few available on the market if you check your local natural foods co- op or health foods store.

Cheese is a dairy product that is not a vegan food product.

If you are going vegan for the first time and are craving cheese, there are some vegan options of cheese made from cashews, almonds, and soybeans in

These ingredients are dairy byproducts that are not vegan.

Fish, meat, and eggs are all natural ingredients, but aren’t necessarily all vegan.

It’s difficult to know from exactly where the natural flavorings in a product are sourced from with all of the options, but it’s always a possibility to contact the manufacturing company directly.

This common food additive does not offer any flavor or nutrition benefits, and isn’t the safest of oils to consume for overall health. Palm oil has been proven to hinder the function of the liver and kidneys, and to lead to toxicity of the reproductive organs.

Furthermore, palm oil is not harvested in a sustainable way. It takes parts of the Earth’s tropical rainforest to be cleared to harvest this, and it affects the endemic species that are endangered. When you purchase popcorn that has this type of oil in it, your dollars are going toward supporting this harmful business.

Yellow 5 and yellow 6 are food colourants that are also sourced from petroleum, and are considered vegan.

The main concern with food colorants is the morality behind the testing of them, as many are tested on animals, and some even die as a result. This poses an ethical question to the production of these ingredients, and is reason enough for some vegans to not include these chemicals in their diet.

Certain popcorn may have these additive ingredients in the recipe, so if you’re a stricter vegan you may be curious to screen for this ingredient. One of the best vegan popcorn brands, Earth balance has created this popcorn flavor with a blend of navy beans and non-GMO corn, plant-based and features all natural ingredients, is gluten-free, and delightfully tasty.

If you’re one of those vegans that misses the taste of cheese, this popcorn choice may be a fair bet. And, it’s pre popped popcorn that’s ready to eat.

This one contains 3 grams of protein per serving and zero grams of trans fat. 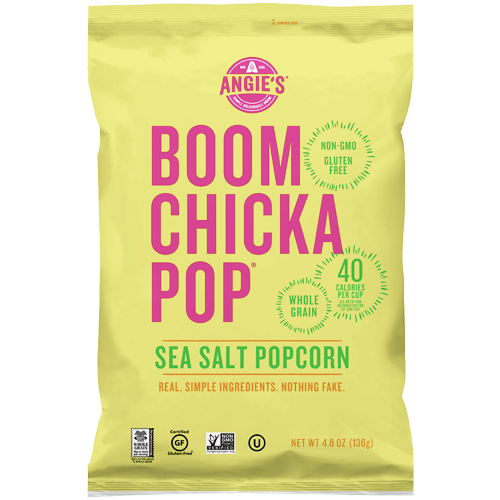 If you like to eat crunchy popcorn right out of the bag and not go through the extra step of popping it, consider this ready to eat vegan popcorn.

This vegan popcorn brand is gluten-free, whole grain, 40 calories a cup, and doesn’t have any trans fat.

There is also a popular non-vegan flavor available, the Real Butter Chicka Boom Popcorn, that features real butter in the recipe. It’s not vegan, but it is gluten free and a whole grain food item.

You can pick this pre popped popcorn up at your local Whole Foods or grocery store. 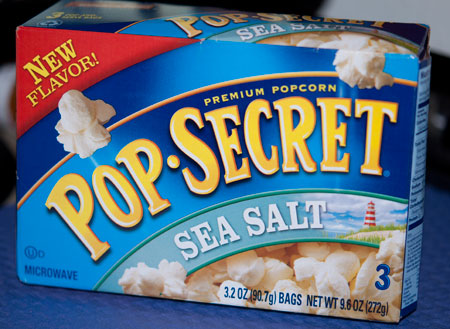 This is a standard popcorn that’s the microwavable kind, and it doesn’t have any animal products.

Out of the microwave popcorn brands that are vegan, this company offers many flavor choices.

The 8 vegan flavors to choose from are:

For those of you that like your popcorn hot and freshly popped, you’ll likely enjoy any of the completely vegan above options. 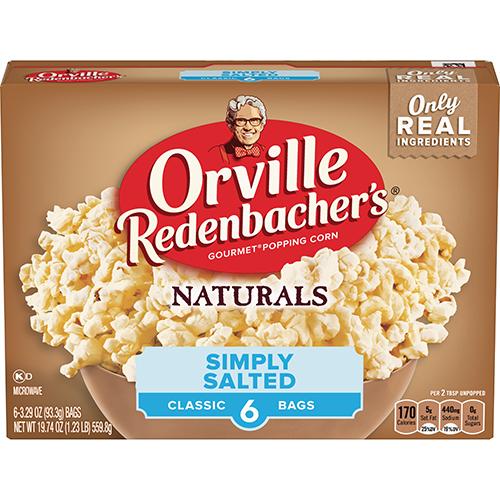 Orville Redenbacher popcorn vegan comes in a kettle corn flavor, a sea salt flavor, and lightly salted simply salt, avocado oil popcorn, Skinnygirl lime and salt, and Smartpop kettle corn. The other flavors that this company offers are not vegan.

You can also purchase the popcorn vegan kernels as-is from the company to pop yourself, if you don’t wish to buy the microwavable kind.

How to Make Vegan Popcorn at Home

For those of you that have been thinking about making popcorn in your kitchen, consider watching this video for the how-to.

If you make your own popcorn at home, you get to add whichever spices you want and experiment with different flavors, and you can be assured that it has no preservatives.

Most often times, the popcorn you see in the movie theater glass box has been doused with butter.

However, you can always call the specific movie theater to further inquire.

One recommendation for a movie theater popcorn that doesn’t contain butter is AMC theaters popcorn – it’s been cooked with coconut oil, and is vegan.

If you live a plant based lifestyle, and even if you don’t, you now know that popcorn is vegan.

There are an abundance of popcorn brands to choose from – you really can’t go wrong with any of them.

It’s just not vegan if there are dairy products, etc. in the recipe. Whether you choose to indulge in popcorn or not depends on your level of veganism, and that decision is yours to make.

Author: Brittani
Filed Under: Is It Vegan
Is Mustard Vegan?