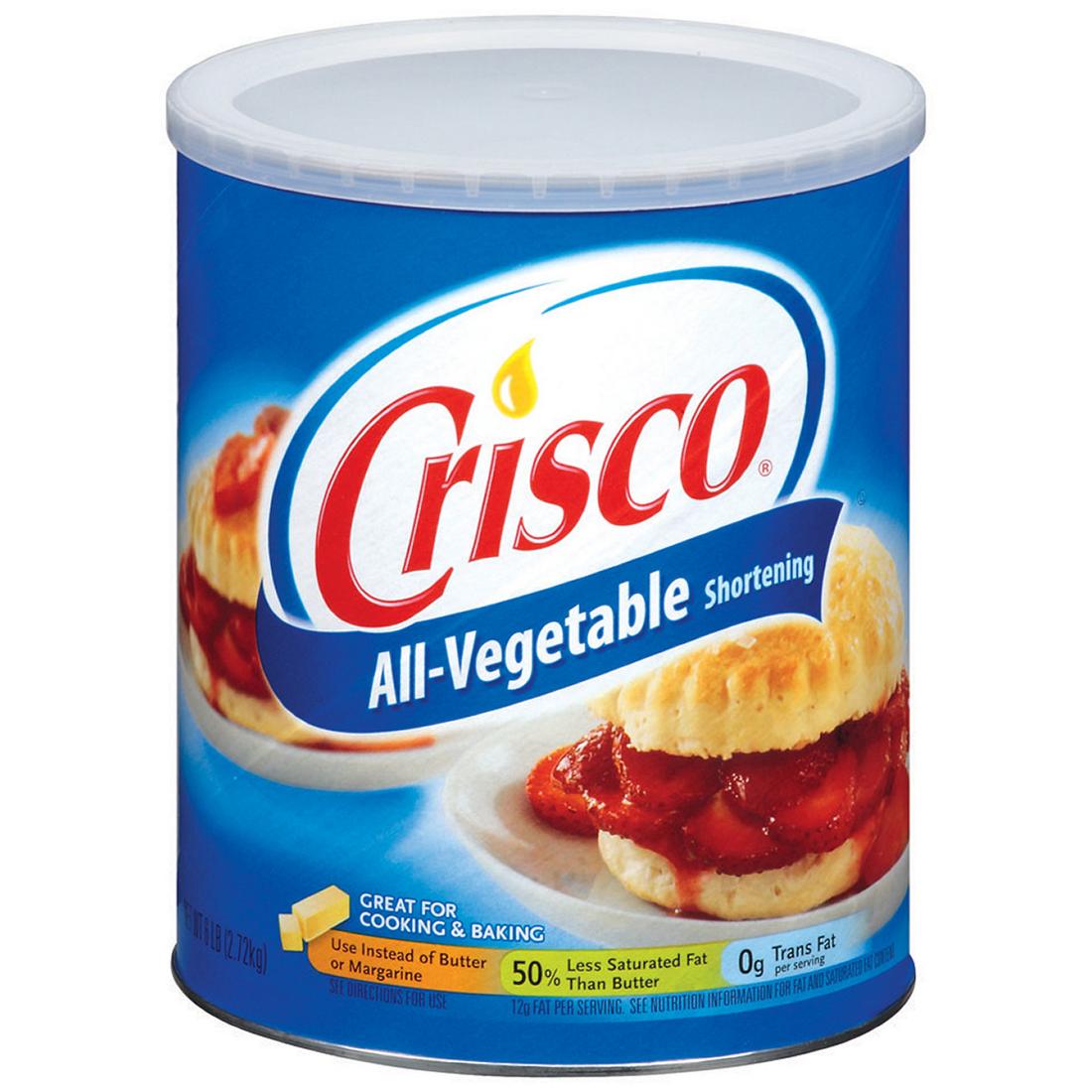 If you like to bake, and even if you don’t, odds are the majority you have some butter, Crisco, vegetable, olive or coconut oil in your kitchen pantry. But, if you just decided to go vegan, perhaps it’s time to more deeply consider what you use as your oil base in your baked goods.

The fact that Crisco is referred to as vegetable shortening on the package may have led you to believe that Crisco is vegan friendly, but let’s investigate further to see whether this is actuality.

Maybe you’ve been watching Cake Boss, and are feeling inspired to experiment more in the kitchen.

Shortening is a great option, especially for those of you who bake because it’s basically fat that retains its solid texture at room temperature, in the same way as butter. This works nicely for crumbly toppings on pastries, or if you need to cut some shortening into your biscuit dough.

Whatever reason it may be that you’d like to know more about this vegetable shortening, let’s clarify the answer to the question “Is Crisco Vegan?”.

What is Crisco made of?

Crisco all-vegetable shortening is a product on the market that has been regarded for some time as a healthier substitute for unhealthy butter. Its name alludes to it being pure vegetables- but let’s dissect this product and unveil the truth of that matter. We don’t want you vegans out there accidentally eating something that actually might have animal products in it. Let’s check out the ingredients:

Crisco is made from hydrogenated palm oil and other vegetable oils.

So, Crisco doesn’t contain any animal fat or lard. In the past, the word shortening implied that shortening and animal fats were used. Nowadays, this no longer applies to vegetable shortening.

Is there dairy in Crisco?

There is no sign of butter, cream, or dairy products in Crisco shortening. And, the fat in it is sourced only from vegetable oils. The only questionable ingredients would be the mono and diglycerides – as the origin of these is unclear. These can be sourced from both plant and animal sources, so we can’t say for sure.

Most mono and diglycerides are derived from soybean oil or palm oil, so it’s safe to assume that the ones in Crisco are vegan, too.

Yes, it is! Crisco products can, however, be manufactured in some facilities that also process ingredients that contain gluten, where potential cross-contamination might occur. So if you are Celiac or have an extreme reaction to gluten, it’s not recommended to have Crisco in your food pantry.

It’s time to throw out the scare word. ..

Many studies have found that any amount of trans fat is unhealthy. Despite Crisco’s label that states there are zero grams of trans fat in its vegetable shortening, the FDA permits food that contains less than half a gram of trans fat per serving to actually claim it has none. Since Crisco contains fully hydrogenated palm oil as an ingredient, it’s a telltale sign that this product has at least trace amounts of trans fat in it.

Any consumption of trans fat has been shown to contribute to the risk of heart disease.

The soybean and palm oil in this Crisco shortening isn’t likely to cause significant harm to the body, as long as it’s consumed in moderation.

What about the TBHQ and mono and diglycerides?

Also, the TBHQ (tertiary butylhydroquinone) is an additive that’s used as a preservative in this, but has been linked to health issues such as liver enlargement, and increased risk of tumors and seizures in lab animals. The FDA limits the amount of TBHQ to .02% for products on the market.

The mono and diglycerides in this product insinuate that it’s gone through quite a bit of refinement.. meaning trans fats have been created. The main reason for this additive is to give the shortening its texture.

So, Crisco can be considered healthy, if you’re conscious of keeping your consumption to a minimum. Maybe you can just use it for when you bake cookies, or in your pie crust recipe.

Is coconut oil a healthy alternative to Crisco shortening?

Similar to Crisco all-vegetable shortening, coconut oil is also refined, but it doesn’t go through quite as much processing as Crisco does. The fat in the coconut oil is derived from Medium-Chain triglycerides (MCT’s), which are extracted from the oil. MCT’s are a great energy source (it helps the body make ketones, which fuels the brain), fights inflammation, and favors weight loss. Also, unlike Crisco, coconut oil isn’t hydrogenated.

*Fun tidbit: MCT molecules are smaller than those of most of the fats you eat, such as L.C.T.’s, or long-chain triglycerides, which makes them easier to digest and assimilate to the body. These provide your body with more get up and go power for that morning run you might be wanting to make a habit.

Coconut oil is naturally solid at room temperature (since it’s a type of saturated fat), so it’s more preferred by bakers to canola or vegetable oil.

Obviously, plant-based coconut oil wins as a Crisco shortening vegan alternative – all the way. It’s not hydrogenated, goes through a minimal production process, and doesn’t have any funky additives.

Is butter a healthy alternative to Crisco?

Well, seeing as how butter is not vegan.. Crisco is the healthier choice because it doesn’t have any animal ingredients. Now, if you’re craving that butter flavor for your breakfast toast – check online for a vegan butter recipe.

Though Crisco shortening is free of dairy, it is highly refined, so some vegans avoid it for other health reasons. In the end, any ingredient or food item that has been minimally processed is best for long-term health.

A healthy alternative to Crisco that has beneficial omega 3’s for brain health is soybean, flaxseed, or canola oil. Omega 3’s are the healthy kinds of fats.

What other vegan-friendly products does Crisco sell?

Crisco also sells coconut oil, olive oil spray, cooking oil, and professional grill master spray – all of which are totally vegan. The only non-vegan item Crisco sells are its products that contain fish oil as an ingredient.

Crisco may not be the healthiest, but it sure is considered vegan. If you’ve been thinkin’ about adding healthier ingredients into your recipes, perhaps it’s time to at least give coconut oil a try, or whatever oil you find strikes your fancy as a healthy alternative.

Author: Brittani
Filed Under: Is It Vegan
Are Pretzels Vegan?
Is Nutella Vegan?